Signs of spring are starting to show up 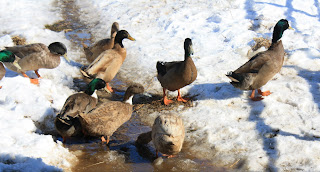 The ducks are loving the puddles that are cropping up everywhere. They make such a mess of the yard and ruin the grass. Know that if you ever want to have ducks that you will never have a nice yard or garden again. 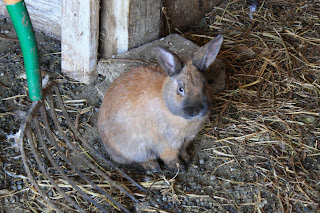 Little Rabbit went out but then realized puddles aren't his thing and came back in. He doesn't play well with other rabbits so he got booted out of his cage. Sounds like he is the lucky one to be out and jumping around but it make him very vulnerable to danger or worse, an untimely death.
. 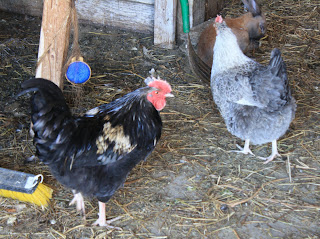 The chickens really don't like to get their feet wet. They haven't been out of the barn since November. They stick their heads out the door and then quickly retreat. They remind me of the ground hog, but instead of checking for spring once during the winter they check every day. 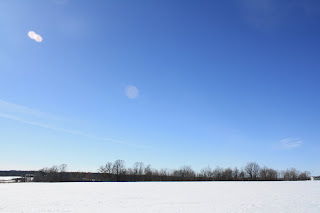 The sky is a brilliant, bright, warm looking blue. 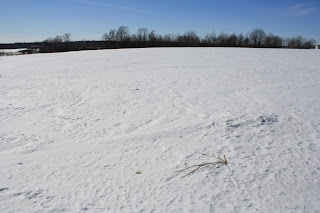 This is the part you can't see in the top picture, acres and acres of snow waiting to melt. 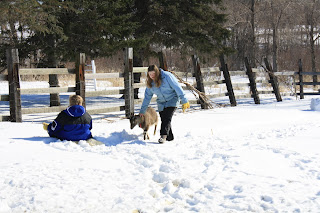 When Eeyore is out he loves to be in the middle of whatever is going on. Here his intentions are to help the kids with their snow rolling but he was standing in the way of progress and Dancer had to lead him out of the way. 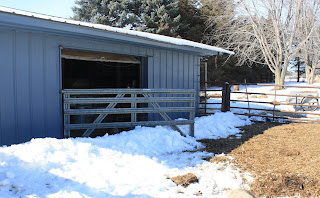 All the snow came off the top of the barn roof in one huge pile. Until that melts we won't be getting the gate closed. 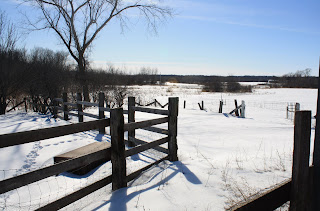 It's going to be a while before we can get the garden going. This one has at least three feet of snow in it. 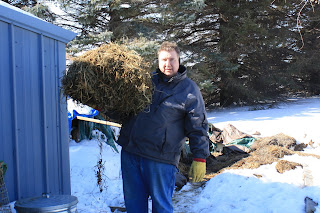 The chores are much easier and more enjoyable when it is warm out. Dad doesn't even have a hat on. 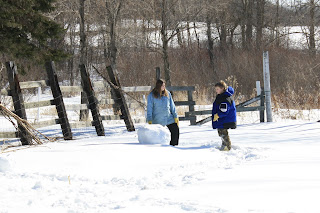 The kids tried to make a snowman. The snow is perfect because it is so sticky but the balls where too heavy to lift. 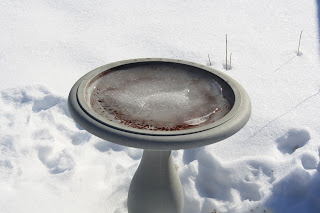 The bird bath is making a come back. The cat uses this for it's drinking bowl more often than not. In the winter the cats and chickens drink out of the goat waters or eat snow. I think the cat has to humble himself to drink out of the goat's pail so this is an ego booster for him. 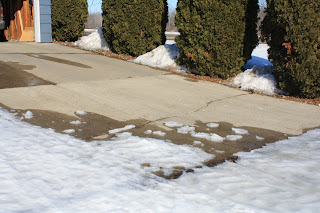 The drive way is finally starting to show some cement. We don't shovel it much in the winter, just the side where we back the car out. The other side the kids sled on and the guy who plows our snow usually takes a pass at it so it isn't as deep as the yard. 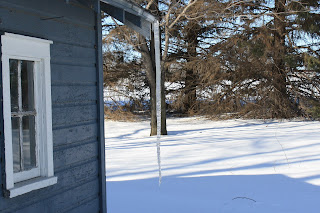 The icicles are growing at an alarming rate. When it is nice during the day and cools off quick in the afternoon they can grow a couple of feet in an hour. This one is about four feet long. 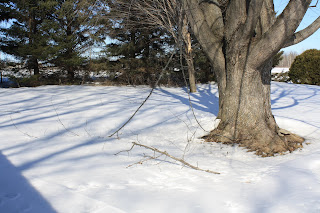 There are branches down all over the yard. Once spring does finally arrive we are going to have lots of work to do.
Posted by ~*~The Family~*~ at 3:36 PM