Dancer and I belong to a mother/daughter homeschool book club. The members take turns hosting the club each month. This was our month to host. The host family gets to choose the book and Dancer choose Island of the Blue Dolphin as we both really enjoy the story. 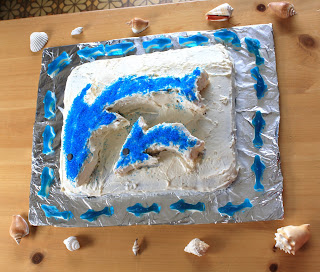 We made a dolphin cake for snack. The instructions are here. http://www.kyledesigns.com/product/DOLPHIN-CAKES/Dolphin_Brithday_Cake_Instructions.html It was much more difficult than I thought it would be. The dolphin part of the cake got a bit more done that expected so it was dry which makes it harder to work with making shapes compared to a moist cake. Someone stopped by to buy some rabbits and we were out in the barn when I realized 'we have a cake in the oven'. It didn't burn but it was in a few minutes too long. The base of the cake was chocolate and the dolphins were yellow cake. Almost the whole thing was gone by the time people left and one person took the rest home for their boys that didn't come so it must have tasted okay. The little dolphins around the sides were gummy dolphins, well they were called sharks but they served the place of dolphins. Those were all gone right away too. 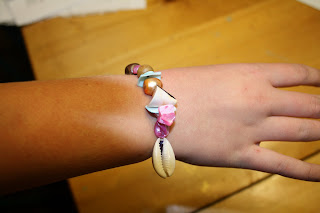 The girls each made a shell bracelet. They really got into this activity, a couple girls went back to make more after the book discussion and even took shells home to make more when time ran out to make them here. 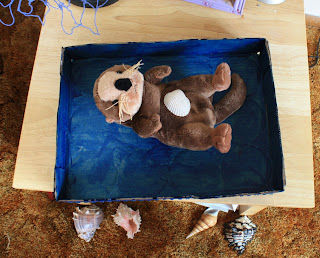 Dancer painted this box blue to be the ocean and put in a little sea otter with a shell on his tummy. This was really cute. She also put some big shells all about the living room and hung up some cotton fishing nets on the lamps and chairs. 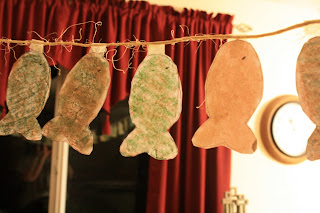 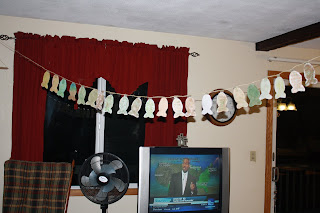 and then hung them up across the living room to look like they were drying for winter in Karana's house. The t.v. really makes it look authentic doesn't it. 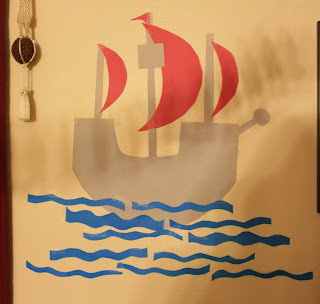 This is just quickly cut out of paper and taped to the wall. The size is about 3 feet by 3 feet. It is the Aleut ship with red sails coming into Coral Cove.

We also played the sound machine's track of birds calling and the ocean waves rolling in. To simulate ocean breezes we ran a fan. It was cold today, a high of 62 degrees, so we turned it off to keep from freezing. I suppose we could have pretended it was winter on the island but some of the kids had goosebumps.

I was unable to find discussion questions for older kids so just made up my own. It took about an hour to discuss them all. The ice breaker question, since not all the girls know each other well, was: If your name had to be kept a secret what would you tell people your name was?


It was a lot of fun going through these questions and the girls, and moms, had really great in depth answers. Dancer was still talking about the questions and how people answered them way into the evening.

Came to check this out. Great stuff here.

We have boys and girls mixed in together. I am looking for a craft but I don't think the bracelets are the way to go with the boys.

I love the questions, they are great!

Thanks for all the ideas.

this was really intresting