Grandpa Jerry got his comeuppance

Grandpa Jerry is a rooster. He is named Grandpa Jerry because a couple of years ago he was fighting another rooster, hurt his leg and limped for several months. Around the time this happened the real Grandpa Jerry, the Dad's dad, was having his hip replaced. So when this rooster started to limp Dad started calling him Grandpa Jerry after his dad. It stuck and so even after the rooster stopped limping we still referred to him by Grandpa Jerry.

Since Grandpa Jerry got his name for limping by being in a fight you can imagine what kind of bird he is, a mean one. He has taken an eye out of another rooster and any time he fights with another rooster there is lots of blood. He is mean to the ducks and won't let them eat their food, pecks them and chases them around the yard. He thinks all the hens are for his X-rated urges. They are scared to even get down off perches to eat because he attacks them. The only reason we have kept him around is because he doesn't attack us. 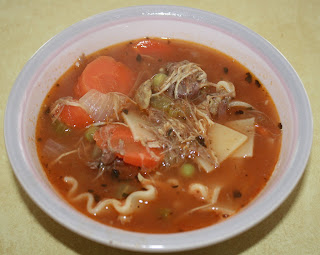 Yesterday, though, was the end of the line for him. He is just too awful to the other birds. Tonight he was Grandpa Jerry noodle soup. And being the mean old cuss that he was, it took 5 hours of simmering in the pot before he was tender.
Posted by ~*~The Family~*~ at 9:31 PM

I think I'm too much of a pansy to eat a rooster that had previously lived in my yard. Perhaps it's because the thought of setting up a mouse trap to catch the little animal in my own house makes me sob. City chick, right?