Newest residents on the farm 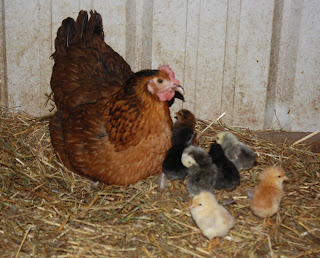 Carmel and her new little brood. She is the only chicken that has sat on eggs long enough to hatch any chicks out this year. She sat on 10 and 7 hatched, good job Carmel! This is the second time she has become a mom. She did a wonderful job two years ago with the one chick she managed to hatch and we hope that she will again.
Carmel was born here a cross between an Buff Orpington and Rhode Island Red. The father to all of these are the late Grandpa Jerry, also born here, who was a mixed of two birds. So now her little ones are all different colors. They are all her's and his because they were the only two that were in that coop since Grandpa Jerry had his trouble with the ducks and Carmel was the bottom of the pecking order in the coop with all the other birds. She had to be taken out or they would have pecked her to death.
Posted by ~*~The Family~*~ at 1:43 PM

Good Job, Carmel! Isn't it great when your birds have babies? We had a buff hatch out 3 babies (well, 4,but one didn't make it...) and it was somehow so much cooler than the box from the hatchery! What a great mix of colors too, I bet they'll be beautiful! Congratulations!