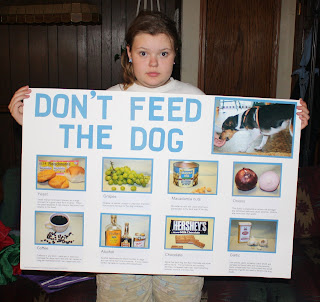 Dancer's latest 4-H project is in an area she has never entered a project in before, dog education. She chose to highlight eight foods that shouldn't be fed to dogs. There is a ton of information out there on this subject and she narrowed it down to eight common foods. The foods she choose were onions, garlic, chocolate, grapes, macadamia nuts, alcohol, coffee, and yeast. Some of the foods we had on hand and some we needed to take a trip to the grocery store to purchase. Then she meticulously staged them all and took pictures of each item. She took a picture of Nikki eating a snack so that she could be a part of the project too. All the pictures are mounted on blue paper and under each is why the food is bad for dogs. The letters are cut out of the same blue that is under the pictures.

A couple of these foods we have given our dogs and not had any problems so we don't know if it depends on the actual dog or what. Nikki has had grapes in the past and loves them.
We have a funny story about chocolate and dogs. Our dog before Nikki, Irene Beans, loved snacks and would also help herself if no one was handing them out. It was Easter and the kids found their candy in the morning and put in their baskets for later. We left for church and in our haste we must have forgotten to put her in the kennel. While we were gone she got into those baskets, ate all the candy (which was quite a bit and she was an only an 11 lb. dog) and a lot of the wrappers. We walk in the house and she is just smiling up at us like thanks for leaving me out and candy unattended. Even with all the wrappers she digested she never got sick. Actually, we were more worried she would have bowel blockage from a wrapper than sick from the chocolate. The Dad had just heard a story from one of his co-workers who's dog had eaten a ball of aluminum foil, got a blockage and she spent thousands on vet bills to save the dog.
Posted by ~*~The Family~*~ at 10:23 PM

My dog has eaten chocolate, too, and never had a problem. He was a small dog. The only dog I've ever heard of getting sick from chocolate was a large Boxer. Maybe it has something to do with size of breed? I don't know.

Thanks for visiting my blog! From my first look at yours, it seems like our families have a lot in common. We hope to get our girls into 4-H this year as well. Your daughter's project looks great! Well Done!