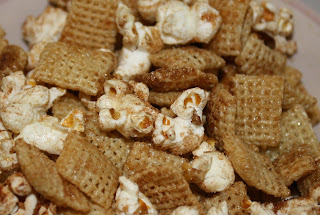 Grandma and Grandpa came to visit today and brought us this recipe. It looked so good we made it right after they left. We had brats on the grill and a nice lunch with them. Don't want anyone to think we waited to have a snack until they were gone!

Mix cereal and popcorn in bowl. Mix sugar and cinnamon in bowl. Melt butter and pour over cereal mixture tossing until evenly coated. Sprinkle with cinnamon sugar mixture, microwave for one minute. Toss in a handful of choc. or butterscotch chips. We used a few of both. Spread on wax paper to cool. If there is any left store it in an airtight container.
Posted by ~*~The Family~*~ at 5:41 PM