You're not welcome here 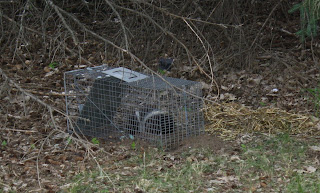 When we had hay delivered a few weeks back, a couple of the ducks were still sitting on nests in the few bales that were left from last years hay. We wanted to move all the bales so we could use them first and make a clean space for the new hay. Dad took a pitch fork and scooped up a nest, with mad duck moms attacking him, and put the nest under the pine trees so they could finish sitting on them in a covered spot in the yard. After depositing the first nest he went for the second, was just getting to the tree line with it and in the first nest is a skunk absconding with an egg. The skunk saw him, turned to spray, Dad dropped the nest and ran like the smart man that he is.
To take care of our little skunk problem the live trap was brought out and set for a swift capture. The first night we had success! However, as Dad got closer to the trap it started to meow. We had caught Vidalia who was not amused with the dirty trick of a treat being in a trap.
The days and weeks have been going by with no skunk. All the eggs, from the now abandoned duck nests, were slowly leaving the area and once in a while we could smell he was near.
Last week after cleaning Dancer's two big bass, Dad put the fish guts out in the trap. Well, yesterday afternoon Mr. Skunk could take it no longer, he went in to have a little fish feast. When we saw him in there we had the dilemma of what to do with a skunk in a trap. It's not like you can go up to it and take it out. We did walk about 15 feet from him and he didn't seemed phased at all which made us think that he has been near for a long time and was use to us. This morning Dad shot him and we are going to wait a while to take him out in case he isn't dead. Skunks are great carriers of rabies in our area and we are so relieved to have him gone.
As we thought back to this spring, we remembered that once in a while there would be the deep, rich smell of skunk in the yard. Ducks would be sitting on eggs one day and the next they would be all gone which we thought was odd, what were the ducks doing to their eggs especially after sitting on them for a couple of weeks. Many of our new ducklings that hatched went up missing with no sign of them, now we think he must have been grabbing a few at the duck buffet every night.
So Mr. Skunk, you are not welcome here. We hope he was not married with children. He was living in an old wood pile behind the trees but it is not like we will being going back there a knocking. We'll just keep our eyes out for any relatives he may have had.
Posted by ~*~The Family~*~ at 11:21 AM

How funny. If only you could have had a video going to catch him running!! I would too.