We have not dehorned our goats in the past, mostly because a dehorner is expensive considering it is only used once a year. Anyone here without horns was not born here and anyone with horns was. However, we have found that people buying goats want them dehorned. They have this idea that goats are crazed and dangerous if they have horns. The horns can look kind of intimidating. Our buck is super frindly and loving but his horns are HUGE, they are about six inches across at the base, and the spread from side to side is over two feet (you can look back in the blog to see a picture).
We have found the horns a handy way to get them to go where we want when they, the goats, don't want to go in that same direction. The horns sort of act like handle bars you can steer them with. All of our goats are quite docile, either because of the way we treat them as pets, or, we have just had the luck of the draw with goat personalities.
Since we are having trouble selling them with horns, this year we decided to dehorn them. Not having a dehorner ourselves, Dad asked a friend to come over and help. He came today and did all eight kids. It isn't a very nice process, the kids yell and it smells like burning hair. They recover quickly and in mere moments act as though nothing has happened. 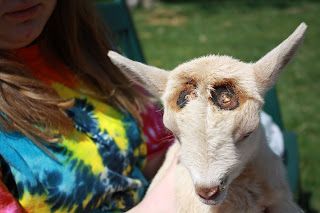 Here is little Elenora after having her horns burned off. The kids aren't born with big horns, just little "buds" on their foreheads. The scabs will fall off in a couple of days and new hair will grow back to where it will look like nothing ever happened to them. It actually looks worse than it is in this picture, the bigger black areas look better soon.

There are some distinct advantages to have dehorned goats. They can't get their heads stuck in fences or feeders. They fight each other a little nicer, It must hurt more to smack foreheads together than bumping horns. They also don't use their horns as weapons and they aren't able to stab another goat which could cause infection. Goats are horrible at getting along with each other so they do fight, a lot. There is a pecking order and one of them is always jockeying to be in the first spot, the prima doe. The buck, if he is in with the does, takes the dominant spot but the does still fight for their spot in the hierarchy line. When Spark was little they would try to be dominant over him and we never let him be with the goats without one of us right by his side. Now that he is taller and stronger to where he can handle the goats with authority, they know that all of us are dominant over them. We, thankfully, only have one doe who uses her horns for fighting and we have never had anyone get stabbed and get an infection, although we know other goat owners who have.
Posted by ~*~The Family~*~ at 3:50 PM