Desdemona, who is a yearling, finished the kidding season with twins. She did not do so ungrammatically though. Just about dinner time, which seems to be the popular kidding time this year, I had a feeling I should go out and check her since it had been a few hours since any of us had been in the barn. I got there and she had a baby's head hanging out of the back of her. Goat babies need to come front feet first and then their heads. It's head was hanging out quite a ways and she had been pawing at the bedding so I don't know how long she had been like that. Assuming it was dead from the way it was drooping down, I tried to pull it out by the head but it was a no go. I was able to reach in, hook the shoulders and with a good pull it came out. As it lay on the hay I saw that it was starting to breathe. We wiped off it's face and as Desdemona started licking it it seemed to come to life. Desdemona, who wasn't very big, started pushing again and we assumed it would be the placenta. It is abnormal for a yearling to have twins their first year. A big surprise when I saw two little hooves and a nose. As she pushed more I could see that it's tongue was sticking out of the side of it's mouth. That is often a sign that the doe has been pushing a long time. Since this one looked like it had died as well I just pulled it out for her. That little one was completely in it's sack and when I broke the sac and wiped the mouth off just to be sure, it let out a little baa. 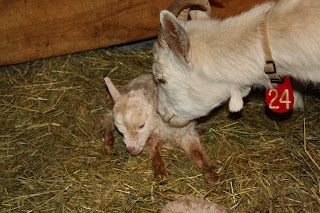 Our excitement was short lived as they were barely able to lift their heads and weren't responding as they should have to the mother's licking. 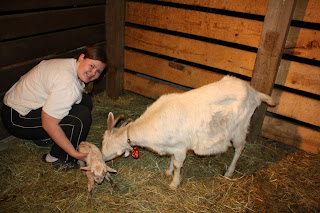 We worked with them for about 45 minutes and there wasn't much improvement, they weren't able to stand and often they just lay as if they were dead. It is just hanging in Dancer's hand 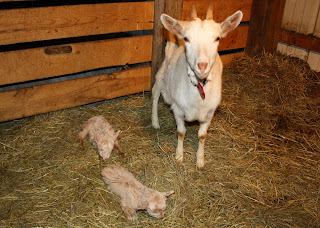 Desdemona is surprised by the camera flash. She had two little girls that we named Ellenora and Anastatia.


We needed to run Dancer to her 4-H Lock-In so we left them with the mother and expected the worse and hoped for the best when we returned. When we got back they were alive. Both of them were terribly small, they had no horn bumps and on one of them the hooves had not grown down over the end of their feet yet so our best guess is that they are premature.


Since there was no hope of them nursing, we milked the mother for the colostrum and brought them in the house to the recycle bin NICU. We worked and worked to get a little something in their stomachs. After a good hardy nap, one was able to stand and move a little bit but the tinier one was breathing really hard and couldn't stand. Another feeding and the bigger one was pretty good and the little one was able to stand. When we brought them out this morning they were both able to toddle a few steps but not nurse.

Tonight they are both able to get up and get around and eat from the bottle but not nurse from Desdemona, who is not happy that her babes are not in the barn with her, although we bring them out for visits. Hopefully in a couple of days they will be strong enough to go out with her and be nursing. I was so excited too that we hadn't had any goats living in the house this year.
Posted by ~*~The Family~*~ at 8:01 PM