We have been patiently waiting for the goats to start kidding. We were going to town yesterday evening and checked them again right before we left. Maggie was acting kind of odd so we decided to put her in the birthing suite just in case she would have them while we were gone. 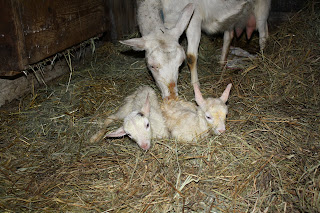 When we got back home, we ran out to the barn and there she was with two little babes! We don't think we missed the birth by much because they were still laying down and covered with the birthing slimy stuff. We wiped them off and gave them a little drying with the hair dryer because they were starting to shiver. She kept licking and licking them so they never really did get very dry. She had a boy and a girl. Spark wanted to name them and he choose Zeke and Gabriella. All of our girl goats have four syllable names so it we think of names all year and keep a list. Maggie's name is really Magnolia. 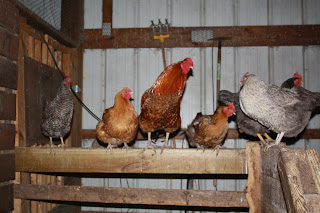 Here are the chicken all lined up watching Maggie. They look like the peanut gallery. 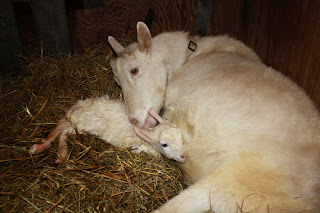 This is Elizabeth and baby Sneezerita right after she was born. We have never seen Elizabeth give birth before. She has always looked completely normal, we will go in the house, come out later and she will be there with two babes. That is how you want your goats to give birth. That was not the case for Elizabeth this year. I thought she was due the 25th of March but they days went by and there have been no babes. A couple of time we thought she was in labor but it never amounted to anything. Since goats come into heat every 18 to 21 days we thought that although she was just huger than huge, she must not have gotten pregnant the first time and she would have the babies next week. Last night when we were out with Maggie we realized that Elizabeth had fluffed up all her hay and was, what we thought, starting to labor. Having two goats in labor at the same time is just such as odd thing, it has never happened here before anyway. We have never even had two goats give birth on the same day. Elizabeth had a really hard time, laying down and getting up and rubbing her head on her stomach over and over. It is hard to decide when to step in and help because sometimes getting in there too soon makes things worse for them. Once the legs started coming out though since she had been pushing so long I grabbed the legs and helped her get little Sneezerita out as quick as possible. As soon as she was out she started sneezing and sneezing hence the name Sneezerita. You can see that the babe is quite big and she didn't have much goo on her. Elizabeth was still huge so we thought she has to still have another one in there. Usually with goats, once the first one is out, the second one lines up and shoots on out not long after the first. It was quite a while before she started to push again and when she did it didn't go well. By the end she was laying on her side with her legs sticking straight out and she had laid her head down with her eyes closed like she was going into shock (we have had that happen before with Maggie). I put on glove and reached inside of her. Once you stick your hand into them you introduce germs so that is one reason to wait to see if they can deliver on their own to avoid infection. I reached in and found a hoof. Then the head but not another hoof. She was just howling by now so I just started to pull it out. As soon as the head and the first leg was out I could see that it was stillborn. I could not get that goat out or figure out if it was the left leg or the right leg that was out because it was so floppy. All the fluid around this baby was also gone so it was so hard to get this babe out. My biggest concern was that her uterus would come out with the baby which really isn't fixable. Finally, finally I got that babe out of her by reaching in and pulling it out by the shoulder. Dad grabbed it quick and checked it over just in case it was alive but it wasn't. Elizabeth, thankfully, popped right up and did not go into shock. We gave her some Valentine conversation hearts for some sugar and Dad gave her a shot of antibiotic so hopefully she won't get an infection either. The baby that died was a huge boy, he had to weight well over 10 pounds. We figure that she must have just been over due and her water must have broken much earlier. The little girl, Sneezerita, was also quite big and strong, she stood up really quickly after she was born.

Worried about Elizabeth and all the babies being okay during the night we stayed up checking them until 4 AM and then kept setting the alarm to go out every couple of hours and make sure everything was okay and the babes were eating. It was a long, short night. 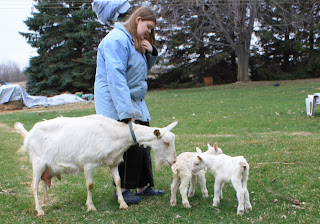 Maggie and her two babes today. They are starting to try and do little flippies. Baby goats are just the cutest things. 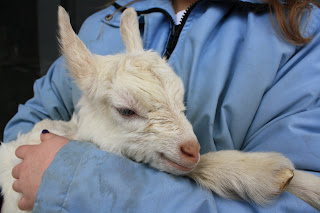 Little Sneezerita enjoying being held by Dancer.
Posted by ~*~The Family~*~ at 10:23 PM

Wow! What an incredible story! I felt like I was reading a scene from a James Herriot book. I'm so sorry you lost a baby but I'm glad Elizabeth was OK. The babies are adorable!