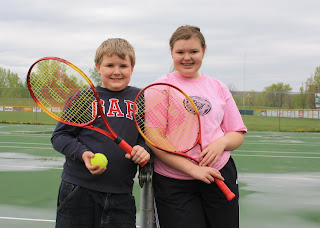 We tried our hand, or should I say racket, at tennis today. In the pictures we don't look half bad. In actuality, we managed to lob it back and forth three times in a row. Anyone vying for Wimbledon does not have to worry about us. Dancer really enjoyed it so I am sure we will improve over the summer. 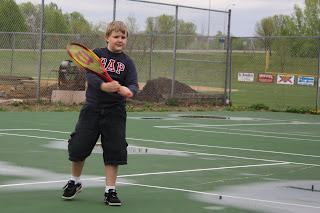 Spark had a few good shots. We did get our fair share of exercise chasing after the ball. 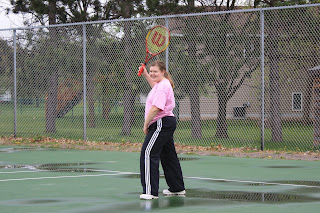 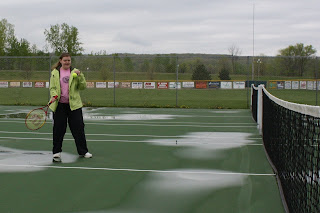 One of our problems was that the court has standing puddles on it. If the ball went in the puddle then it was super heavy and it hardly bounced. We spent a lot of the time bouncing it up and down to get the water to spray off. 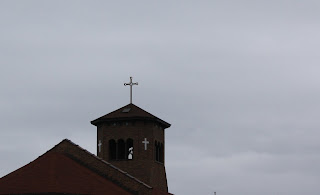 This is the church steeple across from the tennis courts. I love old church buildings with bell towers. The new modern design of churches doesn't do much for me. 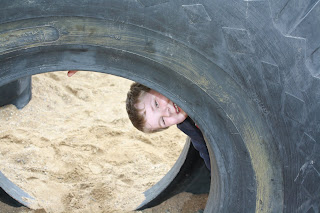 After playing the kids played on the play ground a little bit. They had a bunch of big tires buried in the sand, this one was big enough that Spark could stand up in it. While we were playing tennis there were some older kids over there on bikes. The first thing we think when we older kids during the day is that they must be homeschool. I don't know that they were for sure as we were too far away to see who they were. For all I know there wasn't even any school today. 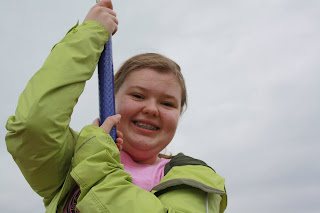 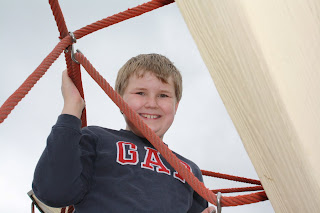 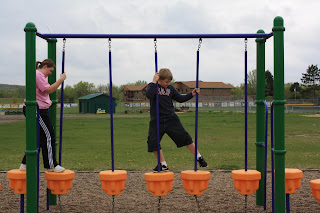 The kids really loved this thing. They were tethered to the ground so when the kids hung on to them they would whip around and around. Dancer talked about how she wants to go back and play on these some more too. They made a little obstacle course and timed who could complete different feats the fastest.
Posted by ~*~The Family~*~ at 8:26 PM