Our hay stack was looking like Old Mother Hubbard's Cupboard, actually we  had just used the last bale when Dad went to get a load so our goaties don't go hungry.  Yesterday, we even rotated the goats out so they could 'get a graze on' and have a little breakfast.  We can't put them all out at the same time because when we sold some of our goats this spring, we sold the herd queen.  Her daughter, who was at the bottom of the barnyard hierarchy decided she was going to take her mother's place.  The goat second in line said, "Um, I don't think so," and they fight.  Normally you can leave them together and they will work it out.  The one jousting for queendom has horns and she uses them on the other one who doesn't have horns.  Neither of them are about to back down so now we keep them separated.
Dad has been calling around and found some hay which was close to home, a nice benefit when we have to go and get it.  The last couple of years we had a guy who delivered but our wet June
ruined a lot hay fields.  They would get it cut, but before it would dry it and they could get it baled, would rain again and then it rots in the field.  We had a hard time finding any and the farmers' had thousand of dollars of hay rotting in their field that they will just have to till back in.  For those of us who don't have our own hay it also means higher prices, we paid $2.75 a bale this year. 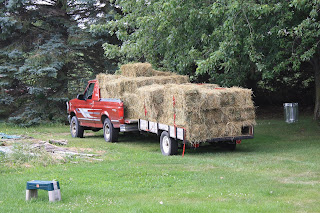 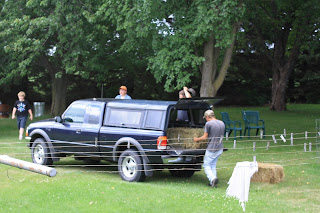 I was just going back into the house when this little black truck comes around the house and pulls up behind the trailer.  Who is this that they had the nerve to drive right into our back yard?  The nice people we bought the hay from.  Two bales had fallen off the trailer undetected by the smallest hay watcher and landed in their driveway.  They were nice enough to throw them in the back of their truck and drive them over.  That was really honest, they could have just thrown them back onto their stack and sold them to us again.  But to bring them over, how nice.  I would have set them aside and waited until we came back for the next load.  Glad they didn't fall out on the road or we would have never known they were gone.  It isn't unusual to see a bale of hay every now and then along side the road.  Three more loads and we are set with hay hopefully until next spring.
Posted by ~*~The Family~*~ at 10:37 AM

Random acts of kindness, I love those!!!

You have cheap hay! We pay $3.00 a bale out of the field. More if you purchase from the feed store in times of emergency!

Have fun stacking all that hay.