How much chicken is in a can of chicken rice soup? 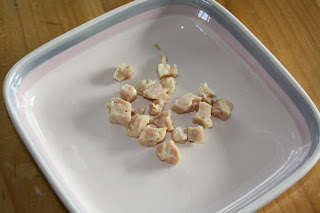 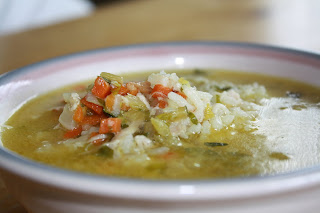 Here is the soup her and Dad made this afternoon... 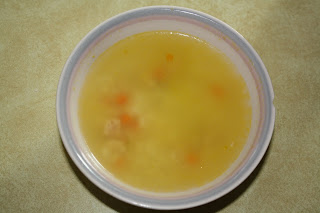 and here is the soup from the can.  Plus they took some of the serving out of the bowl to be able to see what was in it otherwise it just looked like broth.  Which would you rather eat?  Hopefully your answer is a no brainer.
The price break down was as follows:
Homemade soup costs $0.21  per serving
Canned soup costs $0.67  per serving
They made 40 servings for $8.59, which in canned soup would cost $26.80.  For the homemade soup the chicken was $5.99 of the cost which leaves $3.60 for the rest of the soup.  From how much chicken was in the can of soup it seems they are selling really expensive chicken broth.  If Dancer's soup had had as much chicken (her's was a tasty young fryer not an old laying hen) as the canned soup, it would have been about .09 per serving.  That means that every can of soup has about $0.23 of product in it and that is at retail prices not the price that producers are able to buy ingredients at.  Now, go make some soup.
Posted by ~*~The Family~*~ at 10:44 PM

Amazing what we will eat when it is convenient.

I have done a lot of this comparing homemade vs. store bought and homemade always comes out a winner.

Great learning tool for others.

So fabulous that she learned that at this age!

Homemade soup is so much healthier than most canned soups and it's actually pretty quick and easy to make.

If using canned stock, we can have fresh soup cooked up in less than 1/2 hour (not including the time spent chopping veggies) if we chop the vegetables small enough. :)