It is hot out.  Hot weather just begs for ice cream.  We heard it's cry and answered.
It sounded very romantical to make ice cream on a warm summer evening.  Problem is, ice cream can not be made on the spur of the moment.  The ice cream maker, which is on a top shelf in the garage, would have to be gotten down and washed.  To get it down, other stuff would have to be moved.  Between that and cleaning the maker it has already become a "job".  Ice and rock salt are also needed and I don't have either readily on hand so a trip to town would be in order.  See how quickly this went from a fun idea to drudgery?  Instead we made it in the freezer with this simple, but rather lengthy, method.
First, make the ice cream.
The recipe we used was:
1 quart of liquid - we used one pint of half and half and one pint of whole milk.
Heavy cream, half and half, whole, low-fat or skim milk can be used to alter how many calories you wish to denote to your ice cream.
One cup of sugar or 1/2 cup honey
1 tablespoon (or a big splash) pure vanilla extract
Whisk them all together and pour into a shallow cake pan.  Put in freezer for about an hour.  Take out and whisk again to break up the ice crystals.  Put back in the freezer and every half hour take out and whisk.  As it gets more and more frozen and check it more often so it doesn't freeze solid.  Set a timer because when you get going on something else that half hour goes really fast. 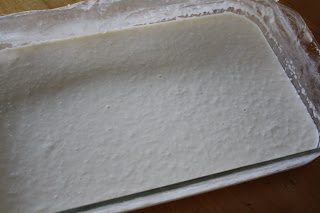 This picture shows how it will took after a couple of hours.  If you don't keep whisking it, it will just be a big block of frozen milk. 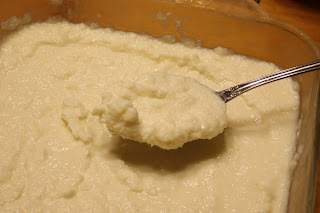 This is our end product after about four hours.  It is still a little watery but this is all the longer we could wait to have  a bowl.  Every time we took it in and out of the freezer the kids would have taste and they were done tasting and wanted to start eating.  It was so rich and creamy!  This made four cups.
Posted by ~*~The Family~*~ at 11:08 AM