Ever since June 21, the longest day of the year, Dad and Spark have been talking about doing a longest day challenge.  The challenge would be where they get up to see the sun rise and the sun set.  The real part of the challenge would be seeing the sun rise since we are not early risers.  Except for Dad who works nights, we can count on one hand the number of sunrises we see in a year.
For several days they have been planning on this challenge but every morning rolled back over when the alarm went off.  On the morning of June 29th, while Dancer and I slumbered, they got out of bed before dawn and started out on their challenge.  When I got up at 8:00 I saw that the barn door was already open and thought, wow they were up early.  Then when I went out to the kitchen and saw the McDonald's cup and the newspaper I knew they had done it.  They saw the sun rise, went to McDonald's for breakfast (the only restaurant in our town that opens before 7:00 a.m.), been fishing, done the chores and milked before 8:00 a.m.
Here is the sun rise. 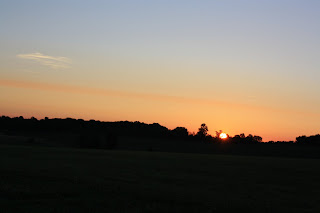 Below are some early morning photos Spark took while they were out on their adventure. 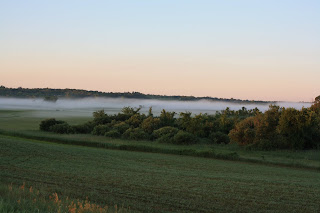 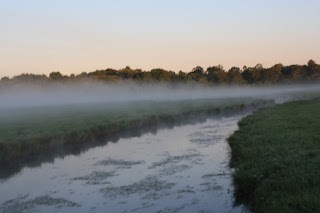 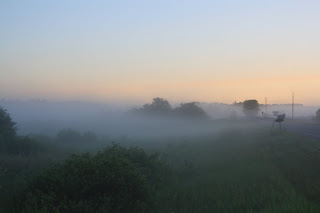 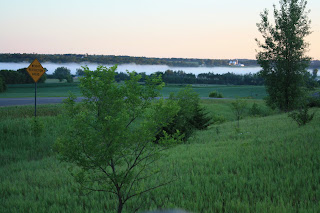 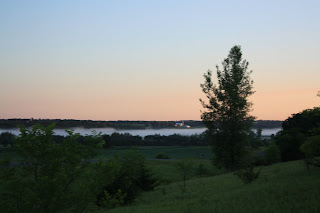 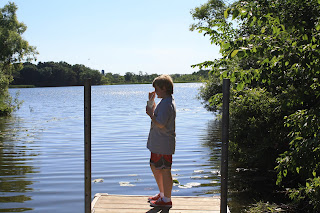 Very unusual for us, we were up, dropped Dancer off at day camp, chatted for awhile with a friend and were on our way back home by 9:30.  We stopped at "The Store," it is actually called that, where they make ice cream treats that are like the DQ Blizzard.  They call them Flizzards here.  Dad wanted to stop in there to buy some leaches and while he and Spark were in there I said to check and see if they have the ice cream turned on this early.  They asked and it is.  The man in there said that he has never made Flizzards so early.  When they told him they had been up since before 5:00 to see the sun rise, been out to breakfast and gone fishing already, he said "well your ready for diner then!" 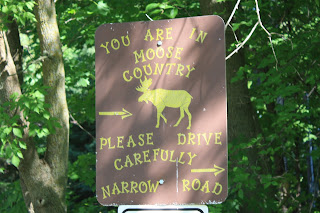 This was a road sign we came across as we were out "rubber necking" as Dad calls it.  I don't think there are two many moose in our area, this is a sign for a country gift shop that is way out in the middle of no where.  I am not sure if they get many customers since 4 wheel drive is almost mandatory to get down the road. 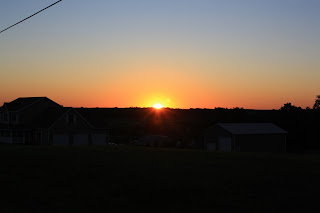 Dad thought the perfect place to see the sun set would be on top of this hill we are on.  It was about 20 minutes until the sun was about to set and we were about 15 miles away.  When we realized that it was so soon we loaded the kids in the car and drove hoping we would not get behind a tractor so we could make it on time.  We got there with a few minutes to spare. 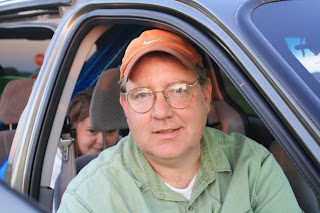 Dancer and Dad waiting in the car.  I like how Dancer was looking out between the seat the headrest and that she looked young.  Those moments are getting harder and harder to come by. 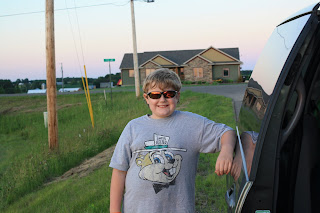 Spark waiting for the sun to make it final decent.  Right before it sets we could actually see it move. 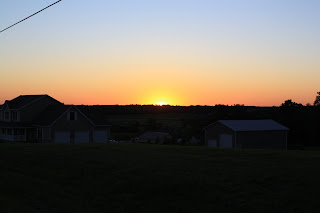