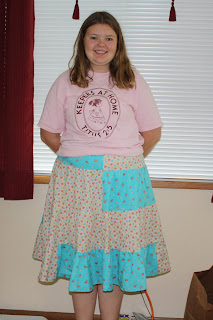 This is Dancer's clothing/textiles entry for the fair.  The pattern in Simplicity 2412, an It's So Easy.   It was really easy, I will give them that, there is just a ton of gathering to do.  She was a pro at gathering by the time she got to the last tier though.  The pattern is for another row on the bottom but that would have made it a long, to her ankles, long skirt and she didn't want that much length.  She picked two complementary fabrics thinking they would be more staggered but it was hard to tell where they would fall when she started pinning and once a lot of it was gathered it was too much work to take it all out just to move it a few inches.  The first two tiers were only two pieces and that kinda threw the whole thing off too.  One of the the tiers was five pieces and so two of the same color had to be together as well.  As usual it is much cuter than the picture shows.  It is is light and very summery looking and will go perfectly with a t-shirt.  Hopefully she will wear it now.  When she was little she wouldn't wear pants, or tights, no matter how cold it was out and now she prefers pants. 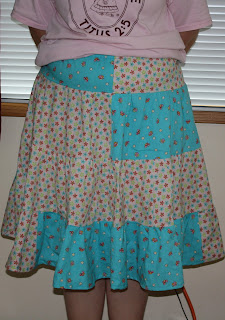 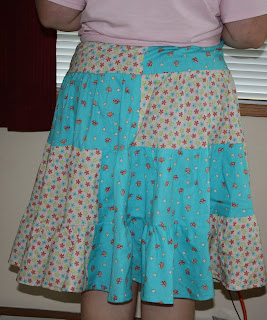 Great job. I think I may be in need of a few skirts.

You lost me at "gathered" but that's OK. I have other gifts. :oD
The skirt looks lovely! My daughter also wore skirts all the time when she was little and then preferred pants as she entered her teens. I remember those days of begging her to wear pants so her legs would stay warm!