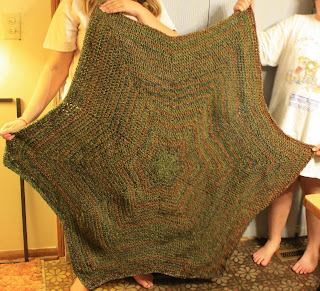 This is the afghan I am putting in the fair.  I am unable to get a decent picture of it.  Where I can get a good picture of the color the camera doesn't want to focus and in the light it looks awful.  Maybe tomorrow I will take one in natural light and change the picture.

Otherwise, it is a pattern for a dish cloth that I liked so much that I made it large into afghan size.  The yarn is super soft and has rich dark colors.  Dancer picked out the yarn to do a project and then lost interest in it.  I loved the yarn and couldn't let it lay unused so I tore out what she had abandoned use it.  I did have to buy a few more skeins, she only had two and I think this used about seven.  It is all double crocheted and grew quite quickly.  I started it in April and by working on it a little here and a little there I have it done in less than four months.  Nikki likes it, every time I would sit down to work on it she would want to crawl underneath it and hunker down.  When it was a little about a foot and  half across she would come and just put her snout under it.  Spark thinks it could be a portal, where you would jump into the middle of it and come out somewhere else.  Either that or a spider web.  I didn't think it was going to have some many imaginative possibilities when I started it.
Posted by ~*~The Family~*~ at 10:11 PM