All the excitement of the big day and when it finally arrived it didn't start out very well, it actually started horribly.  Spark went out to the barn to start the chores as the rest of us were finishing up lose ends and he found one of our little does dead in her pen.  We were all devastated so the fair was a nice diversion to our tragedy.  Dad and I all the chores that day and the next so the kids wouldn't have to go out to the barn when the sadness was so fresh.
The kids both did really well at judging.  It took from just before 2:00 until almost 7:00 for them to get through all the judging lines.  Dancer won five state fair trips after all her worry that she wouldn't win any and she was an alternate on several more.  She won trips on her cat education, consumer education, entomology, potatoes, and goat projects.  Spark won a couple of trips too although he isn't eligible to go until he has finished sixth grade.  He does having the bragging rights though!  He won his trips in Water/Wetlands, Dog Education and Consumer Education.  Pretty impressive for his first year of big kid 4-H.
We didn't take any pictures the day of judging but went back yesterday to look everything over when we brought our open class items and took pictures then.  Not sure how we did in open class because you aren't there for that judging and it isn't done until about 5:30 p.m.  Dad had to work last night which cut our day short so he could get home to nap.  We did see that Dancer won a blue ribbon on a monkey duffel bag she had sewn. 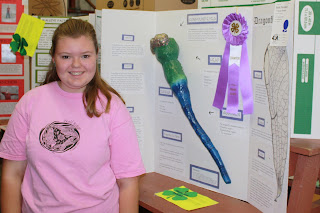 Here is Dancer with her entomology project.  This is the one that we thought she should take because 3-D projects seem to do well but she didn't want to.  This originally started as a science project we thought she could expand on and make into a 4-H project back in about early March.  We got books from the library so she could get started, renewed them three times and then paid late fees on them because they were late.  The project wasn't even started.  Last month we checked the books out again, and again nothing got started.  Finally at the 11th hour it got done.  I think she just wants to forget about dragonflies from here on out. 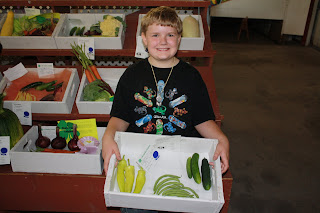 Spark with his vegetable gardening project.  Our garden isn't doing near as well as some other peoples garden.  This is the cream of the crop that we had to bring.  Our beans were done perfectly last week and we are only getting a few cucumber everyday as they are just getting started. 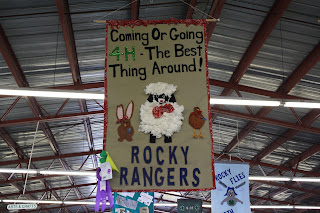 The banner won premium and will be going to the state fair!  The front and.... 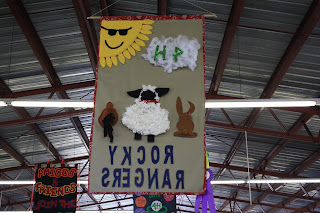 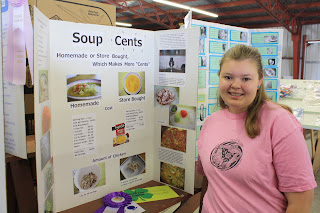 Dancer with the project she is taking to the state fair.  I was glad she chose this one as it is judged in the evening so we won't have to worry about the time frame of getting down there.  If she had chosen something that is judged in the 8:30 a.m. group we would have had to have left home about 5:00 a.m. and chores would have had to been done before we left.  Although we will get back really late it works better than really early for us. 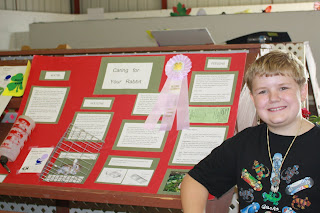 Spark with his rabbit project.  The judge asked him if he had any rabbits and Spark said, "yes, about 25."  The judge got this look like he needed to change his line of questioning.  Then Spark started explaining to him about recessive genes, how they determine the fur color and texture and how we breed them to try and get certain types of fur the judge gave him a look of whoa, I wasn't expecting this of a third grader.  I didn't realize how much he knew until he started talking to the judge and I was standing close enough to listen.  I feel like we are rabbit novices, just scratching the surface of all there is to know, but I guess we, and Spark, have picked up a few interesting tidbits over the years. 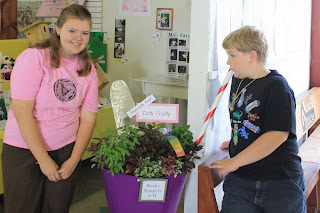 The club planter won an honorable mention.  The theme this year was Tutti Fruity and it was hard to come up with anything.  Dad was the adult chairperson for this project.  We ended up trying to make an ice cream sundae.  It has a spoon, that is the silver thing on the left and a big straw that Spark is pretending to sip out of.  The sign says "Flavor of the Month - Tutti Fruity."  Besides the trying to get colors of ice cream the only thing we had fruity was a lemon basil plant for a little fruity aroma.  There were less entries than usual in this area so other clubs must have thought it was a hard theme too. 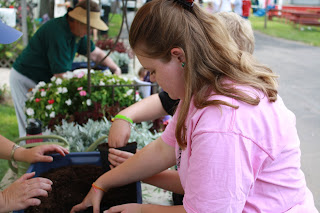 The Master Gardeners, who are some of the nicest people, set up a booth every year where fair goers can plant a flower to bring home. 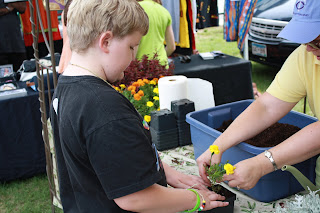 Both of the kids took advantage of that. 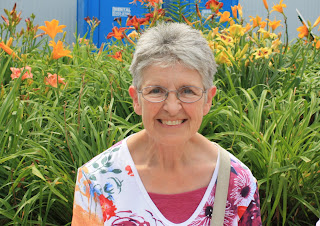 Grandma Pat came with us the second day and Spark took this awesome picture of Grandma.  She looks so nice here and he captured how beautiful she is.  She is always such a good sport to go with us so many of our adventures. 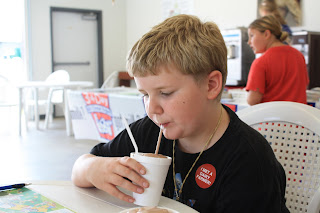 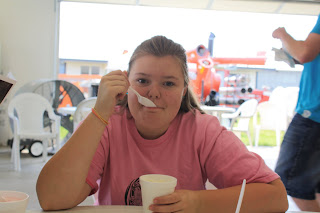 We wait all year for one of these they are so good.  This year they were even better because we hadn't had any treats for two weeks knowing that we would be eating a lot of fair food this week.
Today is the only day that we don't have a reason to go to the fair so we are just recouping at home.  Even the kids said that their feet hurt.  Spark has a rocket launch tomorrow so we do need to run into town to get him engine for his rocket.  Hope Dad knows what it looks like because I don't have a clue!
Posted by ~*~The Family~*~ at 1:56 PM

They did great! Congrats.