Yep, these are as simple as they look.  Put eight pretzels in a spiral, pipe almond bark around and around and make a chocolate spider in the middle. 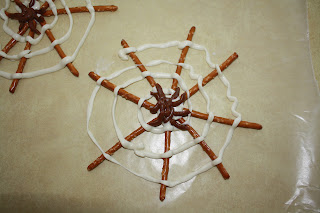 A complication we had was that the almond bark was hot.  I don't have pastry bags so I put everything in baggies and cut the corner off.  It was almost too hot to handle.  I probably could have let it cool a little bit and it would have run fine.   The spiders were chocolate frosting left over from yesterdays owl cupcakes.  A plop of frosting made the body and then eight lines for the legs.  It was hard to get eight legs around the body and not make them look like brown flowers.  We should have put six legs and said it was a bug caught in the web but I didn't think of that when we were making them. 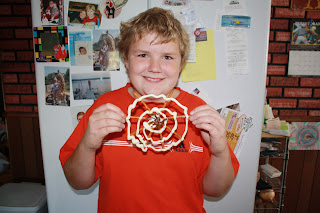 The plan was to make these for Dancer to take to a bonfire potluck she is attending tonight but they seem so fragile that I don't think they will travel well.  No one objected when I said they should just eat them here and Dancer can take something else.  Spark is holding one up here to show how big they are.
Posted by ~*~The Family~*~ at 3:02 PM