We have read that in Medieval times cooks added a lot of spices to their meat.  One theory is that their meat was less than fresh and that is why they spiced it.  Given what the price of spices would have been in the day they probably didn't waste them on rotten meat.
Many of the spices they did use are not readily available in our area or the price for the little bit we would use for one recipe puts them out of our reach.  One spice that was liberally was cinnamon, prompting us to find a recipe that used cinnamon.  We sort of found a recipe but changed it up to fit in with the other ingredient we had on hand. 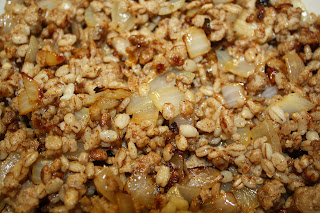 1 lbs. ground pork
1/3 box pearl barley
1/3 tsp. allspice
1 tsp. cinnamon
1 c. ground onion
Salt & pepper to taste
Brown pork and beef until completely cooked. Cook pearl barley in water according to package directions. When all water is absorbed but not dry, add ground meat, spices and onion. Mix well and serve as a breakfast meat with bread, honey or syrup as desired.  The only thing we left out was ground cloves which was called for in a 1/3 tsp. and to mix hamburger with the pork. 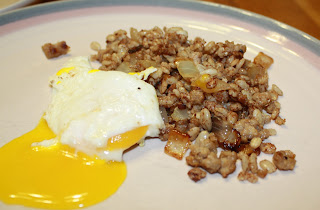 We decided to eat it like hash with fried eggs.  Not sure we will ever make it again, we are not use to cinnamon on our meat, but everyone did have seconds.
Posted by ~*~The Family~*~ at 8:11 PM