School day at the Renaissance Festival meant cheap, cheap tickets and we hadn't been for a few years so we signed up as soon as we saw the announcement about it.  The festival sent out the tickets, a poster, schedule and a unit study by UPS which I wasn't expecting, what a nice surprise.  I thought we would pick our tickets up at the ticket window and that would be that.

Our habit of liking to sleep in payed off.  Everyone else we knew that was going was planning on getting there at 9:00 a.m. when the Faire opened.  I filled our time in as 10:00 a.m. because with a two hour drive to get there getting up at 7:00 was going to be early enough for us.  We were watching the news before we left and there was a fire in one of the building on the grounds, a propane tank blew up at a chicken vendors Shoppe.   The news said they were going to opening late but we decided that we would leave anyway and if they weren't open by 10:00 we would just do something else until they did.  Turns out they opened at 10:00.  Perfect timing.  Well, not absolutely perfect we got there at 10:30 but still.  Wait, maybe perfect timing because we didn't have to wait in much of a line to get in by then.  School day is the perfect day to go, this is our second time going on this day, there is no waiting to get into the festival, I have heard of people waiting hours in traffic just to get on the grounds, and the parking lot is only about 20% full the entire day.  Also most of the school kids that come from schools have already left by about 1:30 or 2:00 and there are no crowds.

We mostly walked around and checked out the shops.  At a hat shop Spark tried on a leather pirate hat.  When he took it off the sales guy said we wouldn't buy it any way because it was $150.  Then he went on to say it was the same kind of hat Johnny Depp wore in Pirates of the Caribbean and how much he hates the make up Johnny Depp wore in the movies.  So in the matter of 30 seconds he deemed that we couldn't afford anything he was selling and insulted one of Dancer's favorite movies.  Wonder how sales went the rest of the day?  We saw a fun juggling show but because of the fire he wasn't on his regular stage and so didn't do all of his usual tricks.  Excellent none the less.  We also so a knife throwing/danger show and couple of comedy acts.  A lot of the humor was quite adult, which surprised me for school day, but maybe they assumed school kids know all that "stuff" anyway?  One of the neatest things we saw was a turtle display where a turtle was snarfing down slugs.  We have never seen a turtle eat in real life.  I was so enthralled with it that we didn't even get a picture.  Not that a turtle eating slugs would have been the most exciting picture if you weren't there to see it.  One of those had to be there things.
We were looking forward to having a calzone.  Only sell them on the weekends.  Same with Gelato.  Dancer wanted a falafel on a stick because we missed it at the state fair but none were to be found.  We wondered if the stand was in the part that was closed off from the fire. 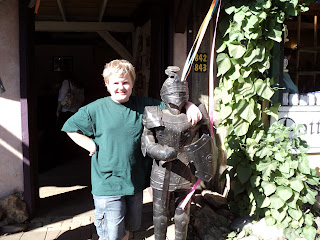 A full armor suit for a knight.  They must have been much shorter back then. 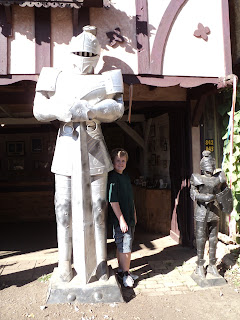 Oh, wait, no they weren't!  I don't think that little guy would have stood a chance next to Goliath no matter how strong is armor would have been. 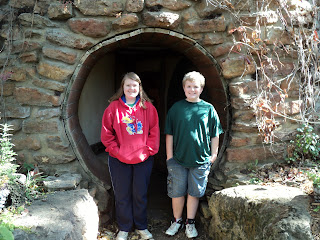 The entrance to the Hobbit hole. 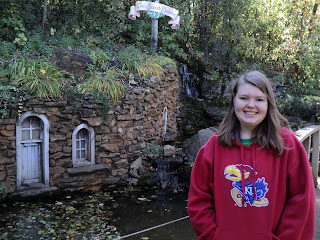 In the Enchanted Secret Garden.  This was very nicely done with lots of little fairy houses and pools in the woods. 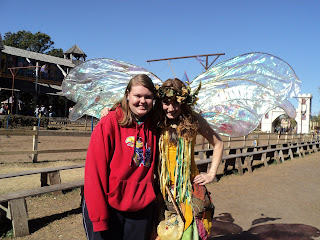 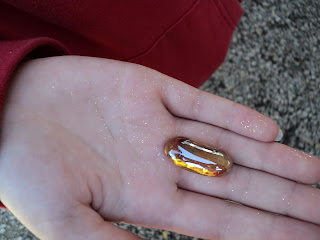 A magical stone from Twig complete with fairy dust.  There was other dust at the event as well.  You can't tell in these pictures but there were clouds of dust rolling about the Faire.  Afterwards, we were all blowing our noses.  It probably added some authenticity to the experience. 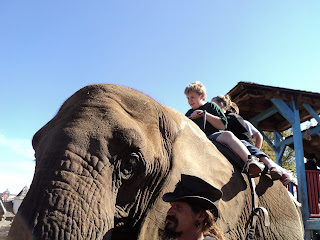 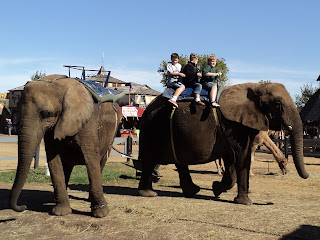 How often do you get to ride an elephant?  Not often so it gets two pictures.  As an aside, when Dancer was a wee little girl I took her to the circus.  There was an elephant there that was giving rides.  We got in the long, long line and waited and waiting for our turn.  As soon as we got to the front of the line she says, "That elephant stinks, I'm not getting on him!"  Back to our seats we went. 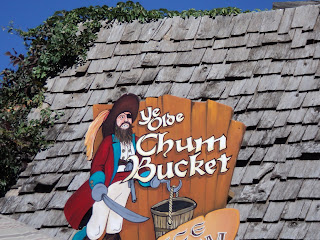 Spark found this hilarious because of Sponge Bob.  He thought it warranted a picture because it was so funny. 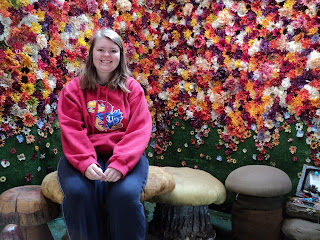 Dancer in fairy land sitting on a toadstool. 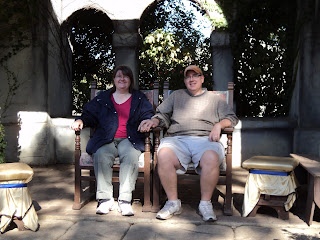 The King and Queen in our family. 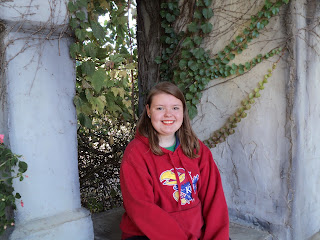 Princess Dancer.  She has bright orange lips because she just finished eating frozen orange ice, which was super yummy by the way.  Dancer wearing her new sweatshirt (K.U. not coo)  She gets lot of comments about it, including one tunic clad lad who's "dad was a Jayhawk". 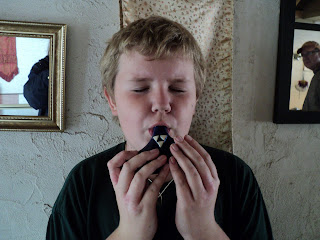 The best part of Spark's day was getting an ocarina, here is playing with his eyes closed just like Link does on Zelda.  It really makes a beautiful sound so when he played it all the way home in the car it didn't make us crazy and want to throw it out the window.  He also got song sheets for all the songs on the game.  That vendor knew her audience and how to sell them unlike the hat guy. 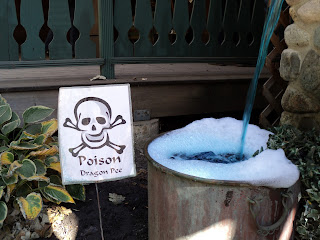 We were with a couple other homeschool kids we know when we came upon this.  The first thing they all said was, "Can we touch it?"  What about foaming, blue, poisonous dragon pee makes you want to touch it? 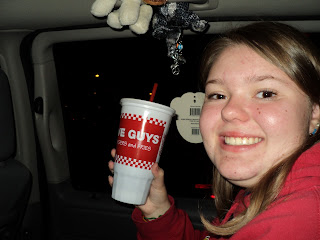 We finished off the day by finding a couple geocaches, can't go anywhere without finding a few especially when we were so far from home, and a stop at Five Guys for burgers.  The burgers were soooo good.  I think mostly because we only go there once, maybe twice a year, and we almost never eat at a restaurant so it was a huge treat not to be eating lunch/dinner we brought with.  We had a fun, fun day!
Posted by ~*~The Family~*~ at 1:09 PM

Awesome! We didn't get to go this year so it was nice to see your pictures. :)