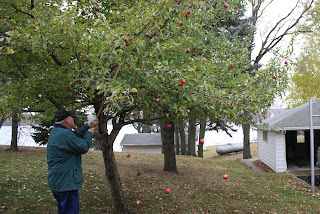 Way up high in the apple tree, three red apples smiled at me.  I shook that tree as hard as I could, down came the apples, mmmmm they were good!

I use to say that with the kids when they were little and today brought the memory of that little song back.  We were at Grandpa Bob's and Grandma Shirley's house this afternoon and got a couple of bags and box of apples off their Regent apple tree before we left.  To get the down Grandpa uses a rake and shakes the tree. 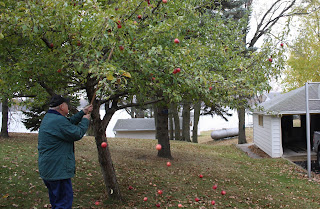 Using the sport setting on the camera Dad was able to get them falling.  Sounded like a hail storm when they hit the ground. 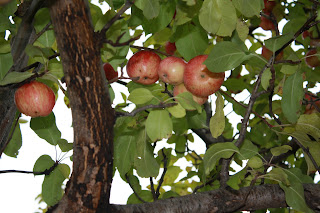 Dancer took a couple a pictures of them still on the tree.  The whole thing was covered this heavily so we have made lots of apple sauce this fall.   Grandpa's neighbors have also made quarts and quarts of apple sauce and pans and pans of apple crisp which they have then been so nice to share with Grandma and Grandpa. 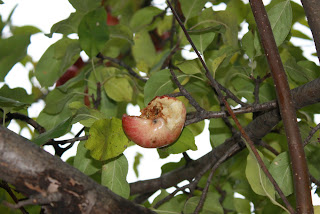 Some critter, I would guess a squirrel since we see them in the yard, helped themselves to this one while it was still on the tree. 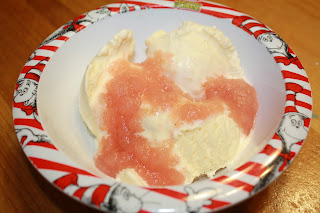 Already made one batch of sauce which was enjoyed over vanilla ice cream.
Posted by ~*~The Family~*~ at 8:53 PM