Pumpkin Carving And A Party

The 4-H party always includes a pumpkin carving contest which has become extremely more competitive over the years.  There is never a so-so pumpkin in the group, they are all highly creative. 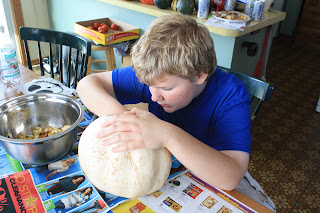 We had a bunch of squash from grandma that we used this year.  Dancer picked this white one to make Jack Skellington from the Nightmare Before Christmas.  We love the music from that movie, not that that has anything to do with the carving but just thought I would add it in here.  She cut the top off and then Spark cleaned the inside out for her.  This is a girl who can skin and gut a rabbit but doesn't like to touch pumpkin innards, go figure. 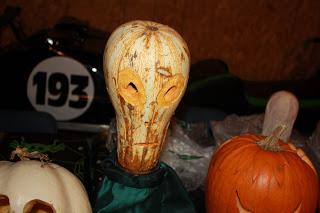 First place went to this scary one made by Spark and Dad. 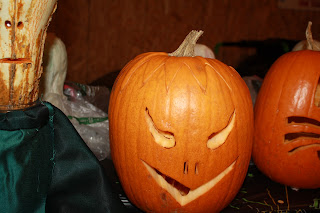 Third place went to this pumpkin carved by Dad.  It won because he filled it with kerosene, lit it on fire and it had flames shooting out of the top the top and out the eyes before the judging.   He had the only pyrotechnic pumpkin but I would guess next year there will be more next year. 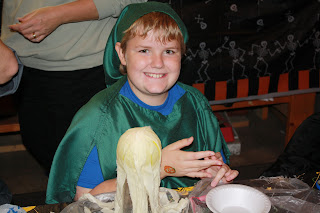 They did a little craft which is still drying at our house.  They are ghosts but I think they look more like jelly fish so when they are completely dry, they are a sheet soaked in starch, we may make a few modifications to them. 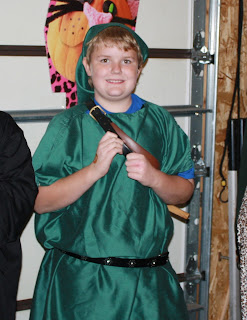 Spark was Link from the Legend of Zelda. 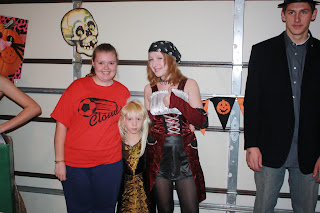 Dancer was making a costume and didn't get it done so she wore her soccer shoes and t-shirt and went as a soccer player.  Not overly creative since she wore it in the morning to soccer and just didn't change clothes but there was a baseball player there too.  The guy with the suit coat and a stove pipe hat, which you can't see how tall the hat is, won third place.  He was Abe Lincoln and I thought should have won first just for the sheer originality of it.

There was also a haunted hay walk manned by the local boy scout troop that one of members is also part of, a couple games, trick or treat line and a huge, yummy pot luck of creepy food.
Posted by ~*~The Family~*~ at 7:25 PM