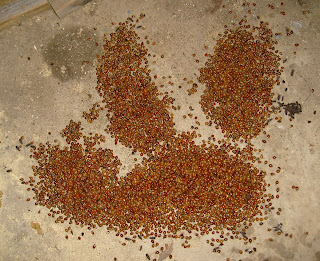 No, it's those dang lady bug beetles. In one of our sheds today the Dad moved a plastic kiddie pool and he found all these creepy little beetles. They are all alive, several layers thick and crawling like this big mass that had taken on a life form of it's own. It was so gross, I just hate those things. In the fall we can vacuum them off the ceiling in the house several times a day, and this year we didn't have near as many as we have other years. We have never found so many in one spot before that weren't dead in the spring piled in the corners. 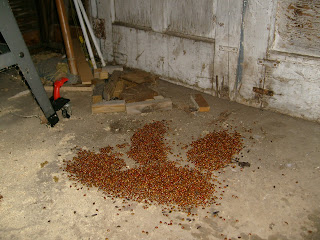 Here is a picture of just how big a pile they were. They covered an area of about three feet by three feet. The shed is an old single car garage so those two doors in the back are 2/3 of a regular garage door. 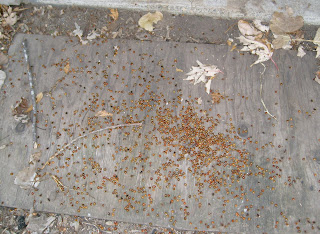 This is right outside the building. They must have been stragglers still going in there for the winter. We have had some really cold weather already so I don't know what it takes to kill these things. How did it end for these creepy crawlies? We built a little bon fire in the pit, swept them up and threw them in.
Posted by ~*~The Family~*~ at 10:10 PM