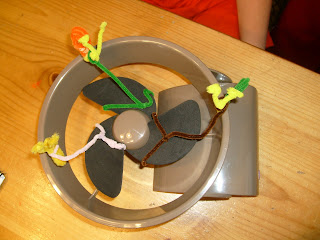 Spark came out today with a camping fan and some snails, and a slug, that he had made out of pipe cleaners. 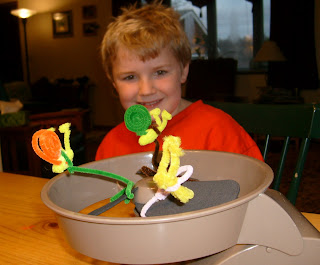 He put leashes on them, made from pipe cleaners as well, and hooked them around the fan blades. Then he would turn on the fan so they could race. The slug's name is Raisin and the snail's names are Cupcake and Killer. 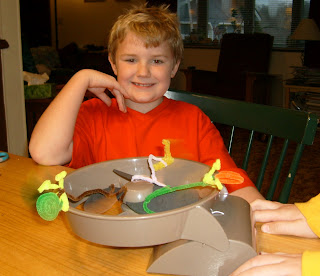 When the fan was flat on the table they were racing 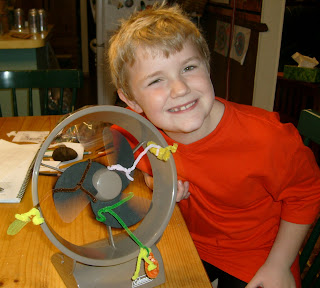 and when it was standing up they were on a ferris wheel. 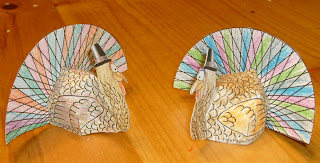 The kids also made these paper 3-D turkeys today. We found them at http://www.freepapertoys.com/ . For having to glue tabs together they went together quite nicely. 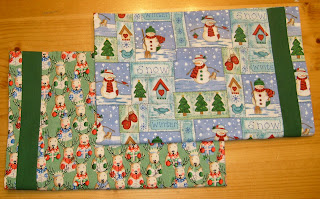 Another project today was to get a couple pillow cases made. I make them for all the holidays/seasons for the kids to make their rooms a little cozier. I will make a few more to send to the kids cousin and a little friend who is going through some serious health problems.

One of our rabbits had babies today and we found them on the floor and crawling out of her cage. She is a first time mom and the mothering instinct doesn't always kick in for them. She had seven, three were dead when we found them and four were in pretty good shape, still moving and squeeking. The four we brought in the house, cleaned them off and laid them on the heating pad to get their body temp back up. Then we made a nest for her since she didn't and pulled out some of her hair to cover the bunnies and keep them warm. Hopefully it will be enough to jump start her into putting more hair in the nest and take care of them. When we closed the barn tonight she was in the nesting box with them, but it could mean she is going to take care of them or she is just in there checking them out and won't nurse them. I guess we will know in the morning. I am apprehensive to go out there now. I hate finding them cold, it is just so sad.
Posted by ~*~The Family~*~ at 10:42 PM