We have traveled off on a tangent of Shakespeare. Dancer loves anything from this period of history so we have gotten quite deep into our study. Spark isn't as interested but he is being a good sport about it and I think he is starting to really get into it. Today we were learning about how the houses where made during this time and how they were perfect havens for rats. Well, with the rats came fleas and with the fleas came the bubonic plauge. Many Elizabethans thought that this plauge was caused by foule stinkyng aire (bad smelling air). To combat this bad smelling air one of their defenses was to make the air smell sweet with pomander balls. They would carry these balls in their hands, in boxes or in their pockets to protect themselves. They would also put them on a chain and hang them around their necks or waists. Of course, today we know that the plauge came from the bacteria Yersinia pestis and it is treatable not the death sentence it was back in Shakespeares time. You know for a good unit study that you need a hands on project and we want a good study so we made pomander balls. We made ours with an orange and whole cloves. Any thick skinned fruit would work, a lime, lemon or grapefruit. 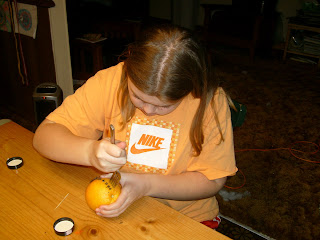 First we stuck the orange with a fork and 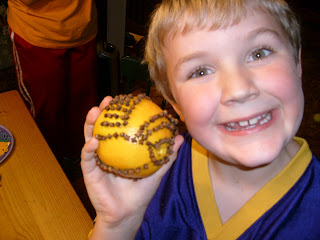 then filled the holes with the cloves. When the whole fruit was covered, it took a couple jars of cloves each to get ours this covered, we put them in bowls. 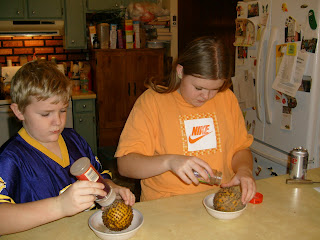 In the bowls we sprinkled on ground nutmeg, cinnamon, and all spice. For the next two weeks we need to keep rolling them in the spices until they start to dry and shrink and then will tie a ribbon around them and hang them up. 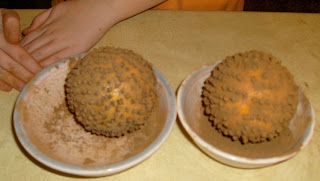 The pomander balls sitting in the spices have made our kitchen smell sooooo good.

This picture came up when I was down loading the pictures to the computer tonight. This is Spark's rendition of a melted snowman. 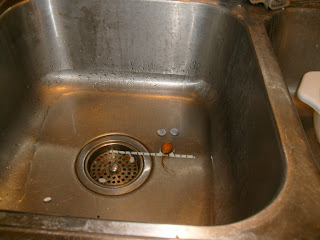 It is two buttons and a little carrot in a bit of water. Poor little snowman, he should have stayed outside.

I love making these! Thank you for sharing this at the History Buffs carnival. It looks like you guys had a nice time doing this project. Come back and join us again soon!

Hi! I'm a librarian in Springfield MA looking for an image of a lemon pomander we can use on our flyer for a program on making them. I came across this fantastic picture of your son. I wonder if you would allow us to use it? If so, please let me know by emailing me at
jcanosa springfieldlibrary org

If you do allow it, could we also use it on our website? (http://www.springfieldlibrary.org)

And in any case, how could I credit you?

Thanks for considering this.