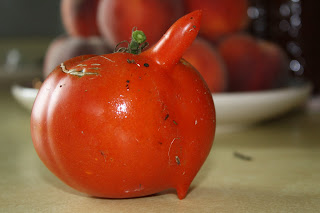 Dad found this little fellow out in the garden.  His nose is sticking up and he also has an appendage sticking down on the bottom as well.  I don't know what makes tomatoes grow these little shoots off the sides of them but they do make for some interesting ideas of what they could be.  Our other thought with this one was that he thought he was better than all the other tomatoes and has his snooty nose held high in the air.  No matter what he thinks of himself it won't save him from being eaten!
Posted by ~*~The Family~*~ at 12:53 PM