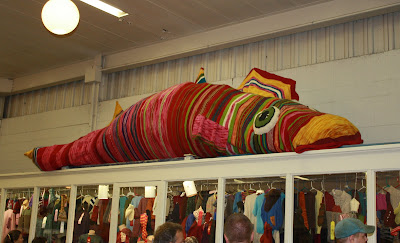 This is a gigantic knitted fish.    The kids and I saw a show about this fish on t.v. this past winter but didn't know we would ever be privy to see it so we were very excited to see it on top of the open class knitted displays.  The pattern is a hat pattern made several, several, several times bigger.  In fact, the eye is about the size of a humans head.  It was made in a yarn shop where people could just come in and knit on this fish as they felt like it.  This pictures doesn't even come close to showing how incredibly cool this fish is. 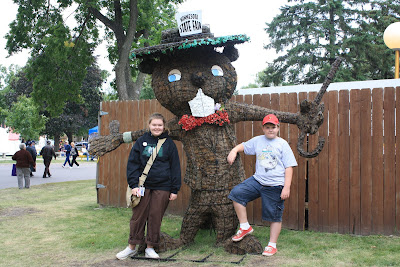 There were these cool different topiaries all over the fair but none of them had hardly any greenery on them.  I don't know if just didn't work out or what.  We did a buffalo with some green but that was the only one.  This is the Minnesota Gopher which is the fair mascot.  With greenery or not it was picture worthy. 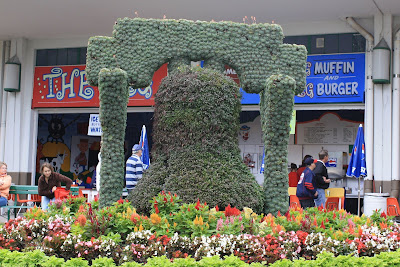 This was green, the liberty bell, complete with the crack made out of hen and chicks, which I love because they remind me of my mother and I think Wandering Jew.  The Wandering Jew would never winter over in our climate so do they take this in during the winter? 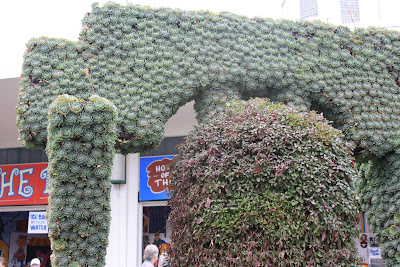 This shows just how many hen and chicks were on this thing.  Amazing. 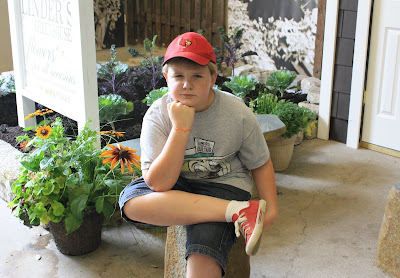 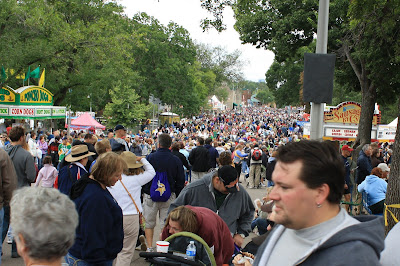 There was just an insane amount of people there.  There are probably more people in this picture than there are people who live in the town closest to us.  There was so many people it was actually hard to walk around and we kept getting separated from each other because of everyone walking every which way.  The total attendance for the day was 155,185 plus all the workers and others who are there for activities that don't require them to go in with a ticket.  Whew, that is a lot of people! 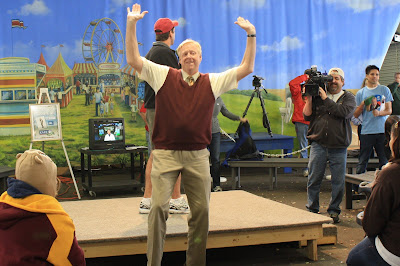 This guy is the do-groove guy for Blue Cross Blue Shield.  He is in commercials for the insurance company grooving around encouraging people to exercise.  This was the KARE 11 news barn, the channel we usually watch.  They were making a news segment for their 4:00 p.m. news show.  Spark went down and danced with him, the only picture I got was the back of Spark, and they took a bunch of footage.  Right away we called all the grandparents to watch the news at 4:00 to see if they could see him.  Grandma called us at 4:15 to tell us Spark was on t.v.!   So cool, he is the only one of us to ever be on t.v.  One other time the kids were in a news story but they only made it as far as the cutting room floor.  The only bad thing was that we didn't get to see it. 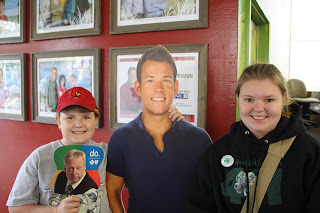 This is the weather man we usually watch.  There was cut outs for all the anchor people but the kids only wanted their picture with Sven, well him and Spark held up the picture of the do-groove man. 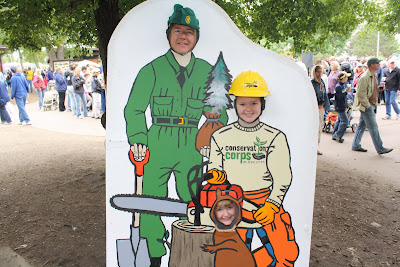 Two conservationist and a beaver. 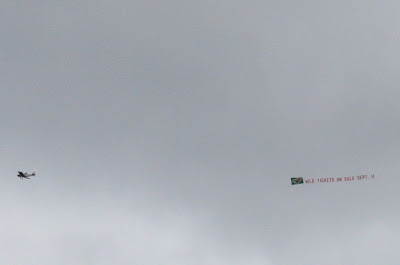 I think these banners they pull behind airplanes are so cool.  It circled and circled around the fair grounds. 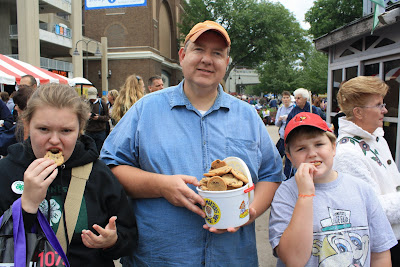 We bought a $15.00 hot from the oven bucket of chocolate chip cookies. 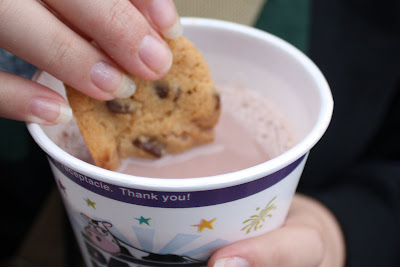 And then dipped them in the all you can drink $1.00 glass of chocolate milk. 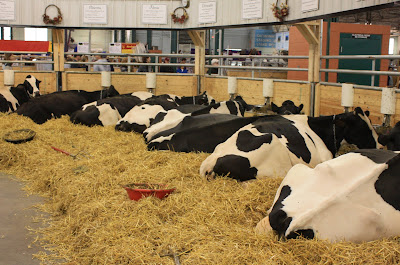 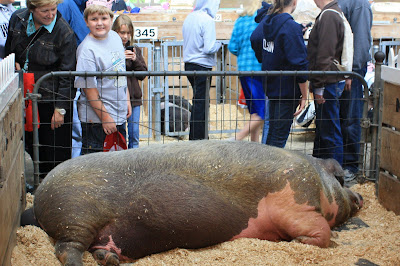 Reggie, the biggest pig in Minnesota.  He weight in at 1,450 pounds, now that is a lot of bacon! 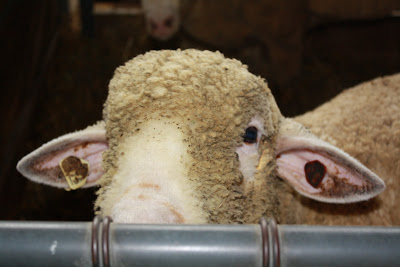 A shy sheep peeking over the top of his pen. 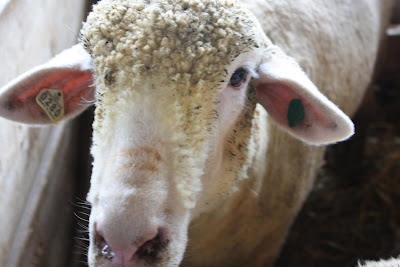 A not shy sheep.  When Dad took the picture of the first sheep, it's pen mate came running over and stuck it's head up baaing over and over to have his picture taken.  Dad obliged.  Once he took his picture he settled back down.  Strange. 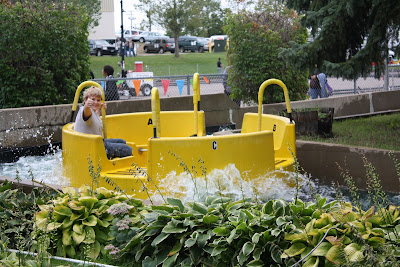 Spark has been waiting to go on this ride since last year.  When it is all done you are pretty much soaked but he didn't care.  He also didn't care that it was only about 65 degrees out.  Sometimes you just have to let them do those things that make no sense as a parent. 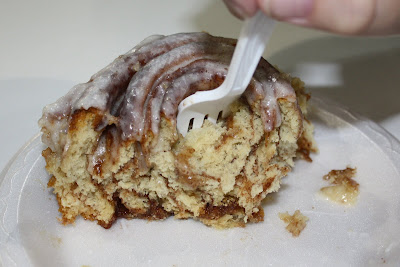 One of the best cinnamon rolls in the free world.  We didn't eat all baked goods at the fair even though that is what our pictures show.  We also had fish and chips, lobster on a stick and a huge deep fried potato chip thing. 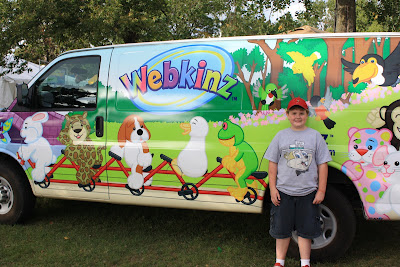 Spark was so pumped to see the Webkinz van.  They gave out cards with a code to get a Webkinz van for  your pets which just thrilled him to no end. 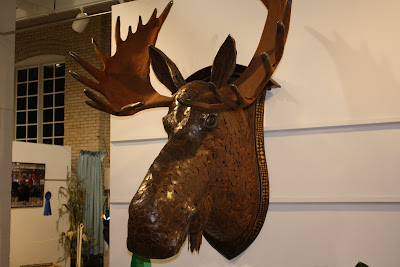 This moose was in the fine arts building.  Being huge Faulty Tower fans we found this to be insanely funny.  If you know that show, we were standing around the moose saying "I can speak English, I learned it from a book." 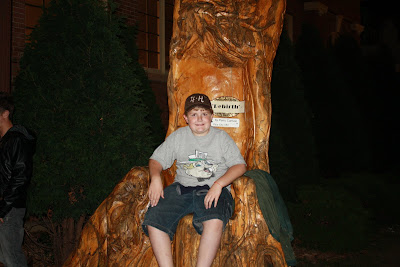 The end of a very long day.  Spark took a little rest in this tree chair and then we headed off to the car.
Posted by ~*~The Family~*~ at 1:12 AM

Except all those people! I don't like those huge crowds at all.

Cool fair. Love the moose. We knew exactly what you were talking about. We are also fans of Fawlty Towers!